Joining Christopher Columbus on His Voyage to the New World

Claud Boyd was a home schooled senior in Aiken, South Carolina.  His participation was sponsored by the Henry Middleton DAR Chapter

To my friends and family in Galway, Ireland:

I am about to embark on an adventure whose origins come from fifteen years prior. If you will recall, in 1477, some of us came across a pair of bodies that had washed up on the shore in a strange-looking vessel. They were of a most odd appearance, as they did not look like Irish, English, Laplanders, Italians, Saracens, or any other group of men known to us. If you will remember, later that day I mentioned I noticed another man examining the bodies. I have met this man again. He is one called, in Spanish, Cristobal Colon, or in English, Christopher Columbus. I am here in Palos to embark on a journey with this man to find Cathay by traveling westward. He seemed convinced from these two books he keeps on his person, Imago Mundiby Pierre d’ Ailly and The Travels of Marco Polo, the latter of which I have also read, that the man and woman who washed up on shore were subjects of the Great Khan, that is to say, residents of Cathay (Quinn 284). Based on this and the calculations he made from Imago Mundi and other such writings, he thinks he can sail around the world from Spain to the Far East (Dodge 48-49). 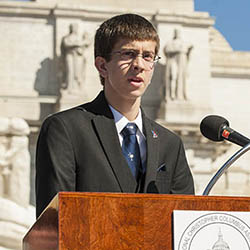 It is a risky adventure, and King John 11 of Portugal already rejected his offer on the advice of his court advisors (Dodge 53). The Spanish monarchs, on the other hand, have approved this voyage. Three ships have been outfitted for this journey, and Columbus has made special requests for the provisions. The food includes some high­-quality sea biscuit, honey, rice, salted beef, and almonds. The fishing gear he ordered should help while away the boring hours (The Mariners’ Museum). There appear to be about ninety men preparing to travel on three ships, about forty on the largest of the three, and the other fifty split between the other two vessels (Fuson 223). I shall be traveling on the largest vessel with the Captain-General, as that is the rank he has been given, on the largest ship. As I stated earlier, we are departing from Palos, therefore most of the crew are local Spaniards and I see dozens upon dozens of red woolen gorros donning their heads (The Mariners’ Museum). I have been traveling under the name Guillermo Ires, and I am aware of only one other non-Spaniard on the boats besides Columbus and myself, an Englishman named Arthur (Fuson 227). The Spanish monarchs have issued pardons to anyone willing to undertake the voyage, and I have heard rumors that four men have taken up the offer. One was a man who was imprisoned, and the others are friends of his who broke him out of prison. I am unsure as to whether this is a testament to their willingness to behave lawlessly or their loyalty to their friend. I hope it is the latter, but I don’t know whether to expect good or ill of them (The Mariners’ Museum).

This Christopher Columbus seems obsessed with his goal, and I am somewhat worried that he will get us all killed. The confounded Genoese, along with the Spaniards, choose to use unreliable dead-reckoning instead of navigation with the stars. This foolish method of sailing will most assuredly lead us all to be ripped to pieces by a storm, swallowed whole by an enormous sea creature, or boiled alive by savages on a distant island. They don’t even seem to care that their maps of the Mediterranean are erroneous. On their charts, the city of Venice is still three degrees off in its latitude (Fuson 42)! It will be miracle if any of us return safely with his negligent navigational techniques. Most of my duties will be that of a regular seaman, including cleaning the decks and rails, and adjusting and repairing the sails and ropes (The Mariner’s Museum). As I know enough Spanish to receive and obey orders, I don’t understand most of the songs the other sailors routinely sing. As such, I probably will be spending most of my free time fishing. An ampoletta is being brought aboard the ship now. This is a little sandglass that is used by the cabin boys to call out the time every half-hour (The Mariner’s Museum). Sometimes this gets annoying during the quiet hours. I don’t envy them though, as I remember the job to be very boring.

If Columbus is correct, and we do make it to Cathay, what a wondrous sight it will be. Seeing the Great Khan, and his twelve thousand Keshican, his bodyguard, all robed in the finest matching suits, with costly jewels and pearls sown in would be magnificent (Polo 46). It would be thrilling to deer hunt with the Khan’s trained eagles and his red, black, and white striped lions (Polo 47). The Spanish King and Queen have also given letters to Columbus addressed to the Great Khan, and he hopes to convert the natives of the land to the Christian faith (Fuson 90). In addition, the new route to the Orient will break the Turkish block on the spices and silk coming from the East. Then they might be too weak to pose a threat to Christian kingdoms.

All in all, this appears to be the beginning of a monumental expedition. As I stated before, Columbus is entirely committed to his cause, and we will either share in his triumph, or drown in the sea with him as fools. The Crown of Spain seems confident enough in him to pay for the voyage. I know not what will come of this, and this may be the last time you hear from me, so I bid you all farewell.