The 2011 essay contest winner was a junior at Ozark High School in Ozark, MO.  Her participation was sponsored by the Isaac Garrison DAR Chapter.

The sky was pale with morning sunshine as the three little ships made their way across the water.  Slowly, steadily, they began their journey across the vast, rocking, fathomless sea.   The day was August 3, 1492.  Christopher Columbus and the crews aboard the Pinta, Niña, and the Santa Maria  had begun a journey that would change the course of the global society forever.  Today, we remember Christopher Columbus as a great explorer.  Unfortunately, as time goes by, we slowly lose sight of the stress of wisdom and life-lessons offered from such a man.  The world spins madly around us; each day, subtle changes take place which will one day define our very existence.  We cannot know the future.  If, however, we take a moment to pause, to delve into the past, we will see that Christopher Columbus teaches us many things.  Three among them are the importance of vision and drive, the benefits of education, and the necessity for constant faith. 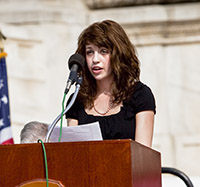 Firstly: as a young man, Christopher Columbus possessed an uncommon work ethic.  He worked at his father’s business and at odd jobs, and was a part of several trading voyages in the Mediterranean, as well as the Aegean, seas.  He devised a plan to cross the Atlantic in order to reach Asia more quickly and safely.  He challenged common conceptions of the size of the Earth.  He pushed the boundaries, tested the limits, determinedly plotting his grand journey all the while.  Through everything he did, everything he worked for, he possessed certain strength, a certain drive, a forceful desire to work hard and make things happen.  It was this drive that allowed him to take risks, initiate journeys, and explore new ideas.  He wasn’t afraid to use his mind and his abilities in order to further the collective knowledge of the world. Today, work ethic is almost more important than it was in the time of Columbus. One cannot function in the work world without work ethic, drive, vision.l  Evolution in business, trends, and society as a whole is inevitable.  If we are not able to look ahead, to contribute to this evolution, we will fall short of our global standard, and we will be left behind.

Secondly: just as he had a thirst for adventure, Columbus also understood the value of education.  A man of his trade could not likely be completely uneducated.  However, unlike some other explorers, Columbus earnestly desired to glean everything he could from what the world had to offer.  He spoke Latin and Portuguese, he studied history, geography, astronomy, the works of Ptolemy, and travels of Marco Polo.2  He voices his belief in the power of education and determination in this quote: “I am not solicitious to examine particularly everything here, which indeed could not be done in fifty years, because my desire is to make all possible discoveries, and return to your Highnesses, if it please our Lord, in April.”3  He was not a scholar, he did not have tutors, he was self-motivated, self-educated.  He was not a man to accept something at face value.  He observed, questioned, studied, and discovered.  He did not rest until he had found the truth, found the answer.  This was, perhaps, the thing which earned him his title, Admiral of the Ocean Sea.  Throughout history, it is clear that education is invaluable to the successful human being.  Whether one plans to pursue gardening or rocket science, education is the heart and lifeblood of the global body.  Teenagers and young children especially must not be allowed to forget the necessity of learning; we are the future leaders of the world.  We must look beyond this moment and into the future, when we will be holding offices and making decisions.  Without knowledge, without the pursuit of truth through research, what sort of leaders will we make?

Thirdly: the concept of faith has long been debated, questioned, and studied by all mankind.  It is something bred into us, some inescapable part of the human soul.   The identity of each individual on Earth is founded on faith, beliefs, and values. Everyone believes in something.  For Christopher Columbus, that something was Jesus Christ. All his life, Columbus’s faith in God was a permanent fixture, a constant force.  Though Roman Catholicism was common in those days, Christopher Columbus really used his faith.  He had a genuine interest in the Bible and in Biblical philosophies.4  He devoted an entire book (The Book of Prophecies) to the subject of the power of religion and divine providence.  When he made his grand adventure across the  Atlantic, he did so in the belief that it was God’s ultimate design for him to sail the world for the sake of spreading Christianity.5  His faith was his stronghold; through the doubt he must have faced in taking on the challenge of such a journey; through the hideous storms that shook the sails and sent men plunging into the ravenous sea; through all the highs and lows of being a sailor and explorer, it was Columbus’s unwavering faith that allowed him to persevere as he did, and to bring a new world into the spotlight for people everywhere. These days, it seems faith can be a difficult thing to come by.  So much pain, sickness, and suffering exist in the world; so man are hungry for hope and opportunity We must consider our mentality.  When the day is clear and the wind is good, we are content to sail slowly absent-mindedly forward.  We take for granted all that we know and possess, seeking only to gain as much as possible in the shortest amount of time.  However, when the winds change and the skies grow dark, when the sea grows angry and tosses us to and fro, what is our reaction?  We give up.  What storms Columbus must have faced out there in those strange waters.  What trials he must have endured, leading a crew into the wide unknown.  What if he had given up?  What if he had turned the ships around and retreated back into the safe and familiar?  Where would we be?  Christopher Columbus did not give up; pure, consistent faith led him to reach his goal and change the world forever.

In conclusion: Christopher Columbus was not a genius; he was not a deity or a savior.  He was a man; a great, determined, inspirational, intelligent man, with a vision that stretched from Europe to the Americas.  He succeeded in bringing together two worlds that had long been apart, and set the pace for centuries to come.  From him, we can learn about vision, education, and the everlasting power of genuine faith.  Though the world is wide and the future uncertain we must not lose sight of the importance of these lessons.  There will be sun-filled days and crushing storms.  There will be periods of prosperity and times of sorrow.  Whatever the weather, whatever the time, we must not forget; we must not take for granted.  We must have faith in tomorrow, faith in the human spirit, faith in the light that inevitably follows the darkness.