The Legacy of Christopher Columbus

By Ryan A. Stoner

The winning essay, in 1998 program, was chosen from among 1,790 entries from 388 schools in the second year of the contest.

At the end of the fifteenth century in Europe, major cultural and social changes labeled the “Renaissance” were underway. There was increasing discontent with the dominant Catholic Church which had been reunited under one Pope, while at the same time trade and commerce within Europe were growing. However, Europe was still isolated from most of the world. The Ming Dynasty ruled in China, a powerful Shogunate controlled Japan, the Inca Empire dominated much of South America, and powerful Muslim Caliphates controlled Central Asia and the Middle East. At this time, Christopher Columbus successfully promoted himself and found support from Queen Isabel and King Fernando of Spain (after being unsuccessful in Portugal) for his enterprise to find a western route across the Atlantic Ocean to the West Indies. He had studied considerable geographical and theological literature and had extensive practical experience of a long and varied maritime career. The report on his first voyage in 1492 was widely read throughout Europe and helped him to find funding for three more voyages, as well as to obtain honors like the tide Admiral of the Seas, and to achieve enough wealth to live comfortably. From a broad long-term perspective, the historical legacy of Christopher Columbus continues to be debated. The importance of his legacy can be best understood if viewed under three general headings: scientific exploration, international business, and political ambition. 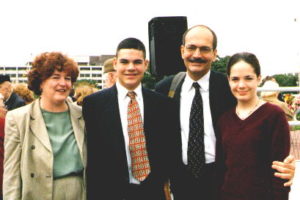 Christopher Columbus led great discoveries in scientific exploration. Through his studies he postulated the size of the world and set off on a journey to prove his theory. His journey showed he had underestimated the size of the earth by one-fourth. Nonetheless, the journey provided important scientific and geographic information through his detailed observations and logs. He also improved navigation techniques called deduced (or dead) reckoning, whereby the navigator finds his position by measuring the course and distance sailed from some known point. Columbus left an important legacy of scientific exploration. Many Europeans and Americans would continue to explore unknown parts of the globe and eventually of outer space following in the footsteps of Christopher Columbus.

Christopher Columbus obtained financial backing for his voyage from Queen Isabella and King Ferdinand by promising to return to them riches from the new world. He in return would get ten per cent of any new wealth. Thus, his trip was financed as an international business deal. He found some gold which was of immediate value, but he also discovered tobacco, which would prove to be an extremely important commercial crop in the new world. Exploration and later colonization as an international business enterprise were an important legacy of Christopher Columbus.

Queen Isabella and King Ferdinand expected to extend their political power to new lands through the conquests of Columbus. Centuries later, the accomplishments of Columbus were reinvented to meet the political needs of a young American nation. The Americans portrayed Columbus as a mythical figure who challenged the unknown sea, making him a perfect hero for a new nation which faced the dangers and promises of its own wilderness frontier to the west. In the eyes of many Americans, Columbus became the first real “founding father.” He was the symbol of American success. His American political legacy is that he came to represent the explorer and discoverer. He was the man of dreams and of during and the hero who faced challenges to change history.

The legacy of Christopher Columbus is very broad with important scientific, economic, and political dimensions/ In order to do justice to the scope of this legacy, only the major aspects of each dimension have been presented. This legacy has shaped the American character. We pride ourselves first, on our scientific approaches to problems; second, on our International business success; and third, on our independent democratic government. These are all, at least in part, the legacy of Christopher Columbus.

RYAN A STONER, the second annual winner of the national essay contest on a theme of Cbristopher Columbus, was born in Washington, D.C. He is the son of Mr. Benjaniin A. Stoner and Mrs. Patricia Daly Stoner and in 1998 was a junior at George Mason High School, Falls Church, Virginia. His father’s State Department career took him to many other countries throughout his sIxteen years. He was a member of “Around the World in a Litetime” (AWAL), an organization for young people who have lived in other countries while American citizens. His interests included journalism and basketball. Mr. Stoner served as the chief editor of the school’s newspaper “The Lasso.” He was selected by his school to attend the Hugh O’Brien Leadership Conference which represents all schools in Virginia.