Why We Celebrate Columbus 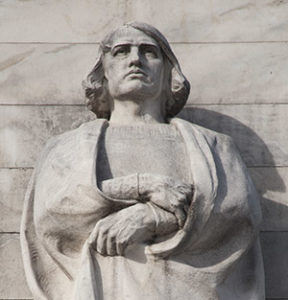 We honor here the memory and discoveries of Christopher Columbus. He was in a sense a grandfather (or at least a great-grandfather) of our country, the “Man of the (Second) Millennium” who stood astride its midpoint and astride the Ocean Sea separating two unconnected worlds. It was he who first linked the disparate civilizations of the eastern and western hemispheres in a way that made possible continuing communication and interaction between them. It was he who first brought to the western hemisphere those Judeo-Christian values, including the Christian faith, that now permeate virtually nearly all areas of our hemisphere.

Seeing both the good and the bad

Admittedly he was not perfect (as is true of all of us in varying degrees). His enterprise had both happy and unhappy results (as do most enterprises in varying degrees), and good and bad consequences followed on both sides of the Atlantic. (For example, the evidence is that unfamiliar disease was unintentionally transmitted in both directions, though the consequences of that proved much more devastating in the “new world.” than in the “old.”) Yet there was more good than bad in both the man and in what he did, and much to admire in both, without denying what should not be denied (though there are a lot of false claims both for him and against him that should properly be denied).. Accepting the implicit warning Shakespeare put into the mouth of Mark Antony about the good that men do oft being interred with their bones, we instead recognize and celebrate those good things about Columbus and his enterprise that have had such a profound effect on our own lives and on that of our country,.which otherwise may not even have come into being as such.

A sensible, fair and just approach

Beyond that, it is also proper to distinguish between an action and its consequences–for good acts can turn out to have unforeseen or unintended bad consequences, good decisions have bad outcomes; so also, bad acts can have good consequences, and bad decisions good outcomes. That is, bad consequences or bad aspects of an outcome do not imply that the original action was necessarily bad or ill-chosen, for in this complex world many other factors intervene to shape unforeseen or unintended destinies. So, too, good consequences or outcomes do not necessarily imply that all was good in the decisions or actions that led to them.

These simple points seem to have escaped many latter-day critics of Columbus and his ventures. It is most certainly a monstrous injustice to saddle one man with guilt for virtually every negative result of what turned out to be one of the most pivotal and consequential events of history–and, moreover, to act as though such negative results were foreseen and intentional! Had a representative of the “new world” discovered the “old” (which, had it occurred, would similarly have been a true “discovery”), instead of the discovery that actually took place, the results would probably not have been greatly different.

An imperfect man, Christopher Columbus had a number of admirable virtues which played a key role in his accomplishing one of the singularly pivotal feats in history which in fact had a number of good outcomes, as well as some bad ones. It is the outcomes that draw our attention to him; but it is the feat and the virtues that contributed to it for which we honor him. That is why the by laws of the National Christopher Columbus Association state:

“The Association seeks to honor not only the memory of Columbus and his historic achievement in linking the Old World and the New, but also the higher values that motivated and sustained him in his efforts and trials. These virtues–his faith, the courage of his convictions, dedication to purpose, perseverance in effort, professional excellence, and boldness in facing the unknown –are as appropriate today as they were in his time.”