Christopher Columbus: In his own time, in history, and today

The 2012 essay contest winner was a junior at Mania Vista High School in Cupertino, CA. Her participation was sponsored by the Los Gatos DAR Chapter.

As an explorer who stumbled upon a landmass previously unknown to the European world, Christopher Columbus was a complex person incapable of being described with a single adjective. Transcending time, this explorer has been hailed as a celebrity and adventurer, yet also condemned as a heretic and destroyer throughout the following centuries. Regardless of any label, his courage was remarkable in venturing into unknown territory with imperfect navigational instruments. Although sailing out into the open sea was regarded as a brash decision in his time. Columbus remained dedicated to his goal of discovering a new route to Asia. However, contrary to what is widely believed today, not everyone in Columbus’s time believed that the world was flat — the influence of the Renaissance was quickly extending throughout Europe, and Eratosthenes had already calculated the Earth’s diameter in third century B.C. Elite, highly educated Europeans did understand that the world was round, but they believed that Columbus had greatly underestimated the Earth’s diameter (and in retrospect, their doubts proved correct). Nevertheless, Columbus’s undisputed courage aided him in achieving his goals. Although public opinion of Columbus inevitably changed over time, the fact that he first brought news of the New World back to Europe is indisputable. 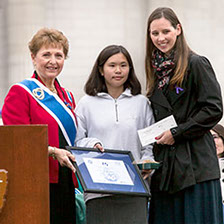 Columbus accomplished his expedition with only rudimentary .navigational tools. His journals reveal that he did not understand how to calculate latitude, and few sailors of his time properly understood longitude. The astrolabe was difficult to use on moving ships, though on land it generally made better estimates of the latitude. Furthermore, Columbus did not possess a spyglass, which would only be invented in 1608. Despite these technological setbacks, Columbus ventured into the unknown. Before his voyages, he was branded a heretic by the Church, although scholars had accepted that the world was spherical even in Columbus’s time. Columbus’s ideas contradicted the Church’s gospels, and the clergymen condemned him for shunning the teachings of the Holy Scriptures. However, the Renaissance would take slightly longer to reach Portugal from Italy, and the masses were still uneducated because their knowledge had been acquired from the Church. He was scorned by many for his idealistic hopes until his accomplishments were announced to Europe, whereupon he became a celebrity. However, although Columbus was an intrepid mariner, he made a poor governor. In 1500, he was arrested in the new colony and sent back to Spain in chains. Queen Isabella criticized Columbus for enslaving the Indians. The Indians, as Columbus called them, had welcomed him warmly, and he repaid them by cruelly enslaving them. In the eyes of the royals, Columbus was no longer a hero. Many colonists claimed that he was a tyrant, and complained to the royals about his poor governing skills. King Ferdinand and Queen Isabella stripped Columbus of some of his titles, although he resumed governing the Indies before dying penniless in 1506, still under the false impression that he had found a route to Asia. The Spaniards and Portuguese gradually forgot about him, though ironically at this time Lisbon was beginning to thrive as the center of nautical exploration.

Ironically, Columbus’s reputation seemingly faded away in the 16th century in the Age of Exploration and the Scientific Revolution, a time when revolutionary ideas and new technological advances were being made. However, a burst of American nationalism emerged after the American Revolution and set the stage for the 19th century increase in “Colombianism”, celebrating Columbus as a legend. Columbus was soon lauded as the discoverer of their new country, although there had already been inhabitants previously. His feats were flaunted, and his flaws forgotten as he became larger than life. Children were taught about Columbus’s courage of venturing into the unknown and the way he changed the manner in which maps were drawn. Many claimed that Columbus had been the first to discover that the world was round, most likely attributable to Washington Irving’s famed biography of Columbus’s voyage. Signs of Columbus’s strong influence include Congress’s funding of the Columbian Exposition for the World Fair in 1892, and the renaming of King’s College to Columbia College in 1896.

However, in more recent times, the widespread glorification of Columbus has undergone a dramatic change. In honoring the 500th Anniversary of Columbus in 1993, the Smithsonian Museum did not mention the word “discovery,” preferring to introduce the idea of the “Columbian Exchange,” the exchange across the Atlantic between America and Europe begun by Columbus, which continues today. This school of thought emphasizes the exchange of diseases such as smallpox and cholera that devastated the Indians. Some sources claim that the Columbian Exchange wiped out 53 million Indians because of disease, but estimates a the original population vary from 10 to 100 million, the latter estimate taken in the 20th century. Through the Columbian Exchange, different crops and animals were introduced to both Europe and America. Europeans reintroduced the horse, which was later bred by the Indians. In turn, the Europeans brought back new crops such as corn and potatoes that became staples of their diets. Columbus’s discovery of the New World created a link between two entirely different continents with revolutionary implications.

Today in the 21st century, Columbus is still celebrated, but his renown has diminished since his glorification in the 19th century. Today, Leif Erikson, a Viking, holds claim as the first European to land in North America. Roman coins have also been discovered in parts of North and South America, indicating that Columbus was not the first European to land there. Columbus’s harsh treatment of the natives has blackened his name, as he overworked and enslaved the natives in the Indies. Columbus Day was later renamed Indigenous People’s Day in some areas due to the minority groups of Indians that revile Columbus as a scourge of their ancestors. Furthermore, Columbus is often despised as the bane of the natives for leading conquistadors interested in gold and slaves to the New World. However, many have forgotten the indirect, though lasting, impact Columbus made on the Americas. Because he paved the way for later conquistadors to explore, state names such as Florida and California take root from Spanish words, and there are many countries in Central and South America that continue to speak different dialects of Spanish.

As opinions of Columbus change, some now believe that history has glorified Columbus into too great a hero and have attempted to vilify or discredit him for his discoveries. However, Columbus was the first to have a specific goal in mind to expand trade, and despite not accomplishing his actual goal of reaching Asia, he undoubtedly made an indelible mark in history. He was reckless and rebellious, but these were the qualities that made him such a successful adventurer. It would be too simplistic to conveniently label Columbus as a good or bad person, as this perception would inevitably depend on the individual. However, it is undeniable that he was a keen explorer, resolute in discovering a route to Asia. Labeled a heretic and a dreamer, and equipped with crude navigation equipment and knowledge of the world, Columbus boldly set out to make revolutionary discoveries; his actions would ultimately change the perceptions of the world forever with consequences that extend even until today.