The 2009 essay contest winner was  a sophomore homeschooler from Plymouth, Wisconsin .  Her participation was sponsored by the Port Washington DAR Chapter

Without question, Christopher Columbus changed the course of history and few dispute the importance of his voyages. It was a new age; knowledge seemed to be expanding in every conceivable direction. The printing press was commonly used, museums were built, Copernicus published his view of the heliocentric universe, and there were advances in math, anatomy, and medicine.1 Discovery was like a map that never stopped unfolding. Each of these advances had skeptics, setbacks, and difficulties, and Columbus was no exception.

Aristotle proved the Earth was round more than 300 years before Christ, so few believed in a flat earth at this time, despite the myth created later by Washington Irving that stated otherwise. It is true, though, that Columbus did not know the earth’s size. His research used the maps of Ptolemy who grossly underestimated the earth’s circumference. Consequently, he encountered financing problems because the monarchy’s consultants believed otherwise.2 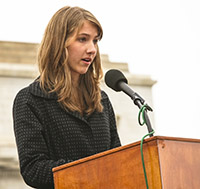 Sailors in the twenty-first century do not face “the unknown” like Columbus did. There is a clear understanding of the size of the earth from satellite imaging and global positioning systems. There are also nautical charts and electronic instruments that guide explorations.

After a month on their first voyage, the growing discontent among the crew reached mutinous proportions. They demanded to turn back; the trip was taking much longer than they had been told. However, the determined Columbus would not so easily give up his dream.

Fearing his crew, he compromised, agreeing to turn back if land was not in view within three days. To his relief on the third they spotted land.3

Mutiny is a low-risk possibility in this day due to the almost constant stream of communication between the captain and authorities on land. Also, fear is less of a problem because getting lost is unlikely with modern maps and GPS equipment.

Anticipating meeting people from the Indies, Columbus brought an interpreter fluent in Arabic and Hebrew. When he reached land he was disappointed to find the natives did not speak the language of the interpreter. His only option was to use gestures.4

Today there are resources so that travelers know what language is spoken in almost any part of the world. They can be prepared with interpreters, computers, or simple books to help translate.

Conflict with the Natives

When Columbus returned to Spain he left some of his crew in Hispaniola to gather gold and spices. Sadly, they rampaged, stole goods, and mistreated the native women. When Columbus returned, his people were dead, having been killed by a neighboring tribe. With an enemy, they had to find a new place to settle and there were more risks.5

Presently, rather than conquering land, sailors or explorers know they are subject to the law of the county in which they travel. They know whether to expect a friendly reception or not because of widespread news and increased communication.

Weather was a significant obstacle in Columbus’ explorations. He encountered many storms including hurricanes. They lost the Santa Maria due to not knowing the location of ocean reefs while an inexpenenced person was manning the tiller.6

Weather conditions can be as fatal to modem sailors as it was to those in Columbus’ day. However, problems can often be avoided by using other tools to find out about weather conditions and the landscape of the ocean.

Columbus faced trials of immense proportions. There were geographical miscalculations, crew and communication problems, confrontation with the natives, and weather hurdles that all had to be overcome. Despite his many other shortcomings, Columbus was brave enough to go where others had not and face those challenges. Although the types of perils today can vary in degree or in type, those who meet with success are those who face their challenges and overcome them.