The 2010 essay contest winner was a senior at El Dorado High School in Burns, KS.  His participation was sponsored by the Susannah French Putney DAR Chapter

The discovery of the Americas truly began when a bold Genoan mariner first envisioned a voyage of exploration across the unknown expanses of the Atlantic Ocean. Although born Christoforo Colombo, this seaman was also known as Cristóbal Colón, Christóvão Colom, and, most commonly, Christopher Columbus.  His formative years, during an era of expanding commerce and trade, were influenced by tales of far-off lands, a wealth of geographical charts and writings, and trips aboard merchant vessels. Christopher’s early experiences seemed uniquely suited to prepare him for a life of ambitious undertakings. Despite these advantages, Columbus faced many obstacles in his quest to chart the unknown, yet his drive and perseverance ultimately prevailed. The upbringing, travels, and educational pursuits of young Christopher Columbus combined to mold an adventurer who would change the history of a hemisphere. 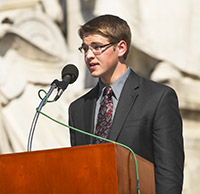 Columbus’ birth in 1451 took place during a time of widening navigation and geographic speculation.  His impressionable years were spent in Genoa and Savona, both busy ports bustling with enterprise and expansion. These city-states, on the western side of the Italian peninsula, were separated from the traditional sources of trade so they instead turned to the zones of West Africa and the unfamiliar Atlantic Ocean. Christopher grew up listening to tales of daring voyages to the African coast, the Canary Islands, and northern Europe. Although he was the son a successful wool merchant and worked in the family business, Columbus succumbed to the call of the sea at age fourteen. He served in roles ranging from messenger to common sailor to privateer on a variety of ships traveling throughout the Mediterranean. This early nautical career gave Christopher a firm grounding in the business of seamanship.

Columbus’ first venture into the Atlantic took place in 1476 when he joined a convoy sailing to Portugal, Flanders, and England. Misfortune struck when his vessel sank off the Portuguese coast, but Christopher escaped unharmed and took up residence in Lisbon where his brother, Bartolomeo, was working as a mapmaker. Columbus, intrigued by this new and growing discipline, soon became a talented cartographer in his own right. He was recognized as an expert in the field and could chart a coastline more accurately than any of his contemporaries. Yet during his time of residence in Portugal, Christopher also began to harbor ambitions of exploration and embarked upon what would become a lifetime of Atlantic travels.

One of Christopher Columbus’ first lengthy voyages began in February of 1477 when he sailed to Iceland. In an account of the journey, he noted that this northern Atlantic island lay “much beyond the limit of the West,” suggesting that the idea of sailing westward to the Orient was already influencing his thinking. At this point in his maritime career Christopher also began to study the techniques of navigation and to record the distances and latitudes of his journeys. He shipped out to the Atlantic archipelago in 1478 and became acquainted with the Madeira, Azores, and Canary island groups. Columbus paid special interest to the Canaries since they boasted the westernmost harbor adequate to launch an ocean crossing. Here he also gained firsthand knowledge of the strong trade winds that would prove vital to the success of a transatlantic expedition. The last sea routes that the young explorer tackled were along the African coast. Here he was able to practice the difficult technique of reading latitudes since he could check his accuracy against those previously recorded by Portuguese astronomers. In addition, Columbus could test his theory of the value of a geographical degree in miles and familiarize himself with the conditions he expected to find in similar latitudes across the Atlantic. By the early 1480s Christopher Columbus felt confident that his nautical experiences had prepared him for the rigors he would endure in his quest to travel westward to Asia.

Yet Columbus’ aspirations to become an explorer were also a product of his academic training. Although he had little formal schooling, Columbus, whose native tongue was Ligurian, became proficient in Latin, Portuguese, Spanish and Catalan. This grasp of languages allowed him to embark upon an intensive study of the writings of the geographical authorities of the day. He was well versed in classical literature, such as the geographies of Marinus and Ptolemy and the works of Marco Polo, D’Ailly, and others. Christopher was especially interested in texts which promoted the theory of a spherical earth and the presence of undiscovered lands beyond the boundaries of the known world.

However, as his own plan to find a westward passage to the Indies developed, Columbus began to reject writings that would undermine his vision. For instance, although he read Ptolemy’s authoritative work, Geographia, extensively, the young adventurer chose to ignore the calculations dealing with the earth’s circumference.  These indicated, with a fair amount of accuracy, that his proposed voyage to the Orient was beyond the range of the day’s sailing vessels.  Instead Columbus chose to rely on other scholars who suggested that the distance by sea between the settled regions of the world was rather narrow. His decision to deny logical theories that interfered with his goal of reaching Asia resulted in a false pronouncement of success when the explorer eventually reached the islands of the Caribbean. Yet despite his errors in discernment, Columbus’ intellectual pursuits armed him with a wealth of geographic knowledge and a desire to push the accepted boundaries of navigation.

Once Christopher Columbus had formulated a plan to reach the Orient by sailing westward, he set out on a mission to make his vision a reality. His first attempt to gain backing for his scheme occurred in 1484 when he petitioned King John II of Portugal for ships and men. Although his request was denied and he faced more refusals over the next seven years, Columbus persevered. Finally, King Ferdinand and Queen Isabella of Spain agreed to finance the expedition, and Columbus and his company sailed from the harbor of Palos, Spain, on August 3, 1492. The fleet, which was made up of three ships, the Niña, the Pinta, and the Santa Maria, made a stop in the Canary Islands for repairs before taking its leave of the known world. As Columbus had foreseen, the strong trade winds carried the adventurers swiftly westward. Despite the fears of the crew, the weary voyagers spied land on the morning of October 12, 1492. Columbus, confident he had discovered an Atlantic route to the Indies, claimed the island for Spain and spent several months exploring the region. He sailed for home in January of 1493, unaware that he had instead discovered what would come to be called the New World.

Christopher Columbus forever changed the course of history with his first bold voyage of exploration. Yet this intrepid pioneer of the seas only set sail for parts unknown after years of contemplation and preparation. Fortunately Columbus’ early upbringing, travels, and educational pursuits provided him with the knowledge, skills, and ambition necessary to forge new paths of discovery. Although he did exhibit errors in judgment and failed to fulfill his dream of reaching the Orient, this explorer’s determination opened the gates to the Western Hemisphere. Christopher Columbus’ dedication to a goal ultimately expanded the horizons of the world.