How Christopher Columbus Changed the World*

The 2008 essay contest winner was a freshman at The Greenwich Country Day School in Stamford, Connecticut.  Her participation was sponsored by the Putnam Hill DAR Chapter.

Long before the voyages of Christopher Columbus (1451-1506), people knew the world was a sphere and its approximate size. Ships had sailed across the ocean to the Indies, and the New World had already been discovered. What Columbus’ voyages accomplished was to increase knowledge of the seas, navigation, exploration, and trade routes, which changed the perception of world geography. This led to discoveries of new cultures, ideas, foreign markets, and colonization, which forever altered world economics. 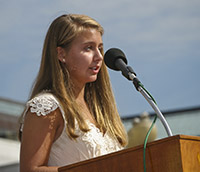 By the 5th century B.C., Greek scholars determined that the world was spherical. Plato, Aristotle, and then Eratosthenes in the 2nd century B.C. calculated the earth’s circumference based on mathematics and astronomy. Ptolemy created maps that were added to over time. They showed the world with more land than oceans, the continents were closer together, and Asia was much larger than it is. Vikings, explorers, and fishing ships sailed the Atlantic Ocean, and charted their routes so ships could find their way across the ocean. Columbus used these maps to chart his course, but he underestimated the distance across the ocean even more.

Discoveries in the Indies and its treasures inspired Columbus to explore Asia. When Turks blocked the eastern land route to the Indies in 1453, Europeans competed to find other trade routes. Portuguese explorers found an eastern sea route around Africa, but Spain needed its own trade route to improve its economy. Columbus was convinced that he could find a shortcut to Asia by sailing west from Europe across the ocean. There were only three known continents, Europe, Asia, and Africa, and one ocean, the Atlantic. It was not known that the American continent and Pacific Ocean were in between Europe and Asia. From 1484 Columbus tried to find a country to support his voyage, but experts argued correctly that Columbus underestimated the distance to Asia. Finally Queen Isabella and King Ferdinand of Spain agreed to sponsor him and provide him with financial rewards, which was a major incentive for Columbus and Spain.

Between 1492 and 1504, Columbus made four voyages from Spain to the New World. He explored the Canary Islands, Bahamas, Antilles, South America, and Central America. On March 15, 1493 when Columbus returned to Spain from his first voyage, news of his discoveries spread quickly throughout Europe to Rome. On May 3, 1493, Pope Alexander VI declared that all lands in the newly explored Indies, not already owned by a Christian prince, would belong to Spain. Columbus and Spanish settlers spread Christianity throughout the New World, which helped Spain develop its overseas empire. Spain competed with other countries to expand trade and Christianity.

On later voyages, Columbus brought more ships loaded with men and supplies to colonize the new territories and return with more treasures. On his fourth and last voyage Columbus explored Honduras and Panama, where he learned of gold and a strait to another ocean. Columbus’ voyages inspired the explorations of others who followed.  Amerigo Vespucci determined in 1502 that South America was part of a new continent, not the eastern part of Asia as Columbus assumed. Ferdinand Magellan discovered a westward route to Asia in 1520 when he crossed from the Atlantic to the Pacific Ocean at the Strait of Magellan. This proved that Columbus was correct; there was a westward sea route to the Indies.

Columbus discovered treasures that affected the world economy. Herbs and plants were brought to Europe to grow new crops and produce medicines. Sugar, tobacco, cacao, and spices were desirable in Europe and created profitable industries. Columbus and his crew expected to find gold, and they did. So much gold came into Spain that it caused inflation, upset the economy, and led to the decline of the Spanish Empire. European countries competed with powerful armies and navies so they could take larger shares of the world’s treasure. Improved navigation opened up new trade routes. Europeans expanded into foreign markets, and sold their goods to the New World. This stimulated European industry to produce more power and mechanical inventions that led to the Industrial Revolution.

Christopher Columbus’ voyages improved understanding of geography, culture, and trade, which changed the perception and economics of the world. A New World view claimed that the New World was free to explore, conquer, colonize, and convert to Christianitv. The idea developed that previously separated peoples were brought together in the New World to work out a common destiny. What followed not only changed the make up of the New World, but also changed the entire world forever.

4. Drake, James, and Palumbo, Joseph. Three Worlds Meet: The Columbian Encounter; A Unit of Study for Grades 5-9. University of California, Los Angeles: National Center for History in the Schools, 1992, reprinted 1998.

*The assigned topic was: How did the four voyages of Columbus change our perception of geography and alter world economics?