“An age will come after many years, when the Ocean will loose the chains of things, and a great land will lie revealed; and a mariner…will discover a new world.” This statement written by the Roman Seneca in the first century was in a book Christopher Columbus carried on each of his four voyages to the New World. In fact, following Columbus’s death, his son Ferdinand wrote beside the line, “This prophecy was fulfilled by my father the Admiral in the year 1492.” How was it possible that a 1,400 year old prophecy came to be fulfilled by an Italian born in Genoa in 1451, someone likely to have received only minimal schooling?  This man’s journey, reflected in the transformation of his own name from Cristoforo to Cristovao to Cristobal to Christopher, is an incredible, and sometimes controversial, story of faith and courage. 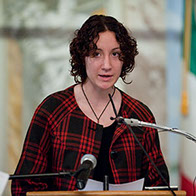 Born into a family of wool weavers, Cristoforo’s fascination with sailing was evident quite early. By age 14, he was sailing the Aegean, learning both navigational and business skills. His determination, and perhaps his very life, was first tested at age 25 when the ship he was on was attacked and sunk by pirates off the coast of Portugal. He managed to swim to shore and lived in Portugal for several years, thus changing his name from the Italian Cristoforo to the Portuguese Cristovao. There, he met and married Felipa Perestrello, giving him his first son Diego. Unfortunately, Felipa died soon after Diego’s birth, so Columbus moved to Lisbon. While there, he worked with his brother Bartolomeo as a mapmaker. Intrigued by tales he heard from sailors, Columbus began considering the possibilities of explorations towards the west, explorations he believed would lead to a new trade route with Asia.

While there is little doubt Columbus’s desire to locate a western route to Asia was partially motivated by a desire for wealth, many scholars, especially in recent years, believe his religious views were perhaps an even greater factor. Columbus, named for St. Christopher the “Christ-bearer,” seems to have believed he was specifically chosen by God to spread Christianity. It is important, also, to understand Western Europe had been in conflict with the Muslims for many years. Columbus understood the Muslims were blocking attempts to spread Christian doctrines where they (the Muslims) were in control. Therefore, Columbus hoped by journeying west, he might spread Christianity in a new direction.

For this reason, while living in Lisbon, Columbus finalized his calculations concerning his proposed expedition westward and presented his ideas to the Portuguese monarch, King John II. However, explorer Bartholomew Diaz had already opened a route around southern Africa allowing trade with Asia. Therefore, King John denied Columbus’s request; he also questioned some of Columbus’s calculations regarding the distance across the ocean.

Undeterred, Columbus traveled to Spain and asked for the financial backing of King Ferdinand and Queen Isabella. Their advisors, however, counseled against it on several occasions during the years that followed. They feared the treasury was already overextended due to the ongoing conflict with the Moors in Granada; also, Columbus was asking for a large percentage of the wealth he hoped to find. Columbus, never wavering from his plans, stayed for several months at the Franciscan monastery at La Rabida, making important friends there. Now known as Cristobal, Columbus may even have become a lay member of the order and was known to wear their traditional brown robes. After eight years of repeated denials by the Spanish advisors, Columbus made a final plea to Queen Isabella. Again, Columbus was turned down, but one of the Queen’s most trusted counselors and a friend to him at La Rabida, spoke on his behalf. Knowing little about navigation or sea routes, Isabella did believe, though, she knew much about judging a person’s character. Therefore, she agreed to help fund Columbus based on his fervent desire to spread Christianity, a goal she shared.

So began a journey in 1492 that would alter the world in unimaginable ways. Columbus assembled three ships and a crew of 90 men, setting off from Palos, Spain, August 2, 1492. The largest ship, the Santa Maria, was captained by Columbus himself. The Nina and the Pinta were smaller, more easily navigable vessels. Much has been written about Columbus’s navigational skills, particularly a method called “dead reckoning.” Using this method, one had to measure distance and speed carefully, something which was incredibly difficult to do using the limited resources of the 1400s. Columbus, too, had studied the wind patterns of the Atlantic and understood the westerlies would be excellent during the return trip, but the trade winds would be necessary for the trip westward. Therefore, he first sailed south to the Canary Islands to pick up the favorable winds, leaving from there September 6.

This first of four voyages presented many challenges to Columbus, but he was steadfast in his belief God intended his success. By October 10, Columbus was dealing with mutinous sailors who were angry and fearful. Bargaining for three more days, Columbus thanked God when land was sighted October 12 at 2 a.m. Naming the island San Salvador, “Holy Savior,” Columbus believed he had found the long sought western water route. After exploring the area for the next three months, he found nothing to change his mind and decided to return to Spain to report his success. Believing the native Taino inhabitants peaceful and helpful, he left 39 crew members behind. The return trip was disastrous, including terrible storms causing them to shelter in the Azores, where they were imprisoned by Portuguese authorities. Furthermore, Pinzon, captain of the Pinta, had become a disagreeable rival. However, when Columbus finally reported to the Spanish monarchs, they did not question he had indeed found the promised gold and wealth of Asia.

Three additional voyages followed, again showing Columbus to be an excellent sailor; unfortunately, he was an unsatisfactory island governor. Numerous problems occurred under his administration, and he was returned to Spain following his third voyage in chains due to accusations against him. His fourth and final voyage led him to explore the coast of Central America, but also left him shipwrecked on Jamaica. When he returned to Spain in late 1504, he found Isabella, his chief supporter, dying and he himself old and ill.

Despite all the difficulties Columbus faced, his faith remained strong. He was inspired by his beliefs as shown in his own collection of Bible verses, Book of Prophecies, in which he clearly showed he felt guided by God’s direction. While some question the source of his repeated visions including God’s own reassuring voice, Pulitzer Prize winning writer Samuel E. Morison states, “…the faith of Columbus was genuine and sincere.”

Seldom has the name Christopher Columbus (or Cristovao or Cristobal Colon) been without controversy. During his own lifetime, he dealt with detractors, but refused to let anyone prevent him from pursuing his dreams. Certainly, Americans should be aware of his role in the Age of Exploration and his endeavors should be recognized. As the monument in our nation’s capital eloquently states, Christopher Columbus’s faith and courage certainly “gave to mankind a New World” at a pivotal point in time,  transforming history with his voyages.

Morison, Samuel E. Admiral of the Ocean Sea: A Life of Christopher Columbus, Vols. I and II, Boston: Little, Brown and Company, 1942.