At Sea or at Home: Different Perspectives on the Voyage to the New World *

The 2007 essay contest winner was a freshman Home Schooler from Merrill, Wisconsin.  Her participation was sponsored by the Stevens Point Chapter, DAR

I  would  never have left my native Spain had it not been for the decree. Issued by King Ferdinand and Oueen Isabella, it ordered all Jews to convert to Christianity or leave Spain within four months. I lived in a large Jewish household, and in a matter of months found myself homeless and destitute. 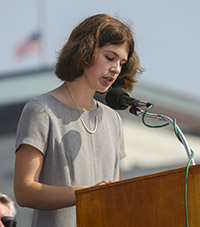 Arriving in the seaport of Palos on August 1, 1492,1 learned that three ships were to depart soon. The Niña, the Pinta, and the Santa  Maria were under the leadership of Christopher Columbus. He intended to discover a western route to the Indies. I jumped at the chance of adventure and stowed away on board the Santa  Maria. I should introduce myself, though; my name is Mordecai, and I am a black rat.

On August 3, the ships set sail. That night, while foraging, I inspected the stores. They included salted meat, dried beans, nuts, wine and raisins. Over the next few days, I started to understand ship life. The red capped sailors were divided into two watches that lasted for four hours each. I soon learned that rats were not appreciated on board. When approaching one of the cooking pots on deck, I heard an outraged bellow, and a sailor hurled a chunk of wood at me. Luckily, he missed. After that, I was much more discreet in my movements.

On September 6th, after a three-week stay in the Canaries during which the Pinta’s rudder was repaired, we started our voyage into unknown waters. Ten days later, I saw large patches of green seaweed floating alongside the ship. Christopher Columbus, or the Admiral as the sailors called him, said that meant we were nearing land. Everyone seemed relieved and excited. I looked forward to being on land again since I was tired of the diet onboard. I hoped that the Indies would have fresh fruit, a favorite food of black rats.

However, two weeks later land had not been sighted. On my nightly forays, I heard the sailors muttering behind the Admiral’s back. On the night of October 1st, because of the rain, I decided to look for food in the Adrniral’s cabin. While I was there, the Admiral entered and began to write in his log, murmuring as he did. I stayed hidden and listened. Though he had told the crew they had sailed 584 leagues, he believed they had sailed 707 leagues. Later, I crept out of his cabin and returned to the hold. I concluded that the Admiral was concealing the real distance so the sailors wouldn’t lose heart.

On we sailed, and the sailors’ muttering increased daily. Then on October 11th 1 heard many voices talking excitedly on deck. I scurried up and learned that land had been sighted. Since it was night, the Admiral would not go ashore until morning. I crept into one of the ship’s boats and waited. In the morning, the Admiral, along with the other captains and members of the crew, landed on the island and claimed it for Spain. While the Admiral and the natives exchanged gifts, I made my way into the foliage. I drank from a stream md was struck with how good fresh water tasted. Since the island was small, I decidec! to return to the ship and continue in the search for the mainland.

For the next couple of months, we sailed from island to island searching for gold and the mainland. Then on Christmas day, disaster struck. The Santa Maria ran onto a reef and sank off the island of Hispaniola. Luckily I was on deck and managed to slip into one of the ship’s boats again. A native chieftain helped the Admiral salvage the wreckage, but it was now impossible to carry all of the crew back to Spain. The Admiral decided to start a settlement with 39 men. While the settlement named Navidad was built, I enjoyed myself. I feasted on mangos and oranges. But I also started to worry. The average life span of a black rat is a little over a year. I realized I might die on the return voyage. So with some other rats, I decided to stay on Hispaniola.

On January 16, 1493, the Admiral set sail for Spain. As I watched the ships sail away, I realized that I would never see Christopher Colunibus again. He was a truly remarkable man, and I was fortunate to have known him.

First Voyage to America from the Log of the “Santa Maria.” Mineola: Dover Publications, Inc., 1991.

“Haiti: Flora and Fauna.” Encyclopedia of the Nations: Americas: Haiti.

Icenhower, Joseph B. Man Against the Unknown. the Storv of Exploration. Philadelphia: John C. Winston Company, 1957.

* The theme assigned for the essay was: “Relate the story of the first expedition of Columbus viewed from  the perspective of one of the following: an ordinary seaman, Queen Isabela or a shipboard rat.”