If Christopher Columbus Returned to the “New World” in the Year 2000, What Evidence of His Discovery Would He Find?

The 2000 essay contest winner was Craig Bucki, a senior at Canisius High School in East Amherst, New York.  His participation was sponsored by the Williams Mills Chapter of the NSDAR.

If Christopher Columbus were to return to the American continents at the start of the third millennium, he would find a “New World” whose character exhibits the impact of his discovery in 1492. Evidence of this impact may be found in symbols, in culture, and in the spirit of the people who now make their home in the lands that Columbus introduced to the rest of the world. 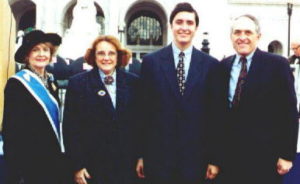 October 12 is celebrated throughout the “’New World’ as the anniversary of the arrival of Christopher Columbus in the West Indies. The perception of Columbus and his accomplishments, however, may differ among the nations of this hemisphere. In the United States, Columbus has long been viewed as an heroic explorer. In 1787, an American named Joel Barlow published a poem entitled “The Vision of Columbus.” This fictional epic describes Columbus in prison as he receives a vision of America’s future grandeur.

[The poem] was useful to promote the Discoverer as a man persecuted for his vision; it helped to set him apart from the old, antidemocratic European order and made him more fit to be revered as a founder of a continent of free republics.1

Based on this symbolism, many in the original thirteen colonies considered “Columbia” to be an appropriate name for what would become the United States.2 Instead, “Columbus” and its derivations were adopted for numerous other geographic locations. Thus, the nation’s new capital became the District of Columbia, while Columbus and Columbia became, respectively, the capitals of Ohio and South Carolina. In time, Christopher Columbus would lend his name to more than thirty cities and towns having populations totaling more than 1.8 million.3 “Columbia” became included into the name for one of the continent’s major rivers, an Ivy League University, numerous streets, corporations like CBS, a Canadian province, and the patriotic song, “Columbia, the Gem of the Ocean.”

Latin America was more restrained to attaching symbolic importance to Christopher Columbus. While visiting South America at the beginning of the nineteenth century, Alexander von Humboldt noted that he had found no natural features or monuments that were dedicated to Columbus.4 This oversight was finally corrected in 1886, with the formation of the Republic of Columbia. Throughout much of Latin America, October 12 is celebrated as Dia de la Raza, the Day of the Race, or culture. Its premise is that Columbus brought about a new racial entity that derived from the encounter of native and Spanish cultures.5

Anglo and Latin cultures, therefore, attach a somewhat different symbolism to Columbus and his arrival in the Western Hemisphere. Nonetheless, in either instance, Columbus now personifies a pattern of change: either from the restraints of the Old World to the freedom of the New, or toward the creation of a culture that incorporates the gifts of both Europe and America.

Beyond symbols, Christopher Columbus would today observe radical change in the culture of the Americas. Throughout most of the hemisphere, society follows a decidedly European model, in such dimensions as religion, government, art, language, and style of living. While native traditions continue to influence the “New World,” its societies exhibit also the broad impact of European ways, as well as traditions brought by Africans who were forcibly transported to the hemisphere. In truth, native, European and African cultures have affected each other. With respect to foods, for example, crops like corn, tobacco, and the potato originated in the Western Hemisphere. But Columbus would today find in modern America such European crops as wheat and European farm animals like the horse and pig. Clearly, Columbus would see in the “New World” a society that changed materially as a result of contacts that he initiated.

Perhaps the greatest evidence of the impact of Columbus is something far more subtle. As a consequence of his adventurism, all Americans have joined people through out the world in a grand endeavor of exploration. His voyage represented a rejection of the fear and timidity that had restrained society during the Middle Ages. Once human kind began to look beyond the familiar, progress on many fronts became inevitable. Symbolically, NASA assigned the name “Columbia,” to one of its space shuttles. Today, Columbus would encounter a modern society whose ever changing character is a tribute to his same spirit of discovery.