How do Americans view Christopher Columbus and George Washington today?

Anita Ramaswamy was a junior at Chaparral High School in Scottsdale, Arizona.  Her participation was sponsored by the Grand Canyon DAR Chapter.

Throughout the course of history, many great men and women have left an indelible impression on America. George Washington and Christopher Columbus are two of the most widely recognized and commonly celebrated men in our country’s history. Our nation’s capital, Washington, D.C., honors both men in its name, reminding us of their everlasting legacies. On Columbus Day and Presidents’ Day, we celebrate their contributions to this land. They were both self-educated, innovative men who left memorable legacies because they impacted America’s future in remarkable ways. 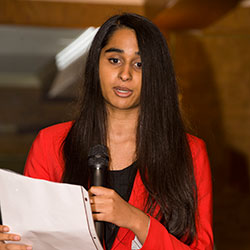 Both Columbus and Washington were essentially self-educated. Washington was by blood a mid-level member of the gentry class. He was one of ten children of his family in Virginia. While he did receive a formal education, his most meaningful knowledge was acquired through reading, writing, and studying on his own. Formally, he was taught at a local primary school as well as a boarding school later on in his life, where he learned many practical skills that related to his family’s farming lifestyle. Although his education was applicable to the real world, he had almost no formal education that encouraged him to pursue knowledge of literature, classics, or the arts. In the book George Washington and Education by H.G. Good, Jonathan Boucher, the teacher of Washington’s stepson, says that “George, like most people thereabouts at that time, had no other education than reading, writing, and accounts which he was taught by a convict servant whom his father bought for a schoolmaster.”

In his statement, Boucher failed to account for Washington’s vast informal knowledge­ he did his best to pursue educational advantages through his own hard work. Etiquette was a very important facet of the society he lived in, so he spent time copying the Rules of Civility and Decent Behavior in Company and Conversation, an etiquette manual with 100 guidelines on how to be a proper gentleman. He also taught himself mathematical concepts and studied literature well past the ending of his formal education at age 16. Columbus was similarly independent. According to historian Edmund Morgan, “Columbus was not a scholarly man. Yet he studied these books, made hundreds of marginal notations in them and came out with ideas about the world that were characteristically simple and strong and sometimes wrong, the kind of ideas that the self-educated person gains from independent reading and clings to in defiance of what anyone else tries to tell him.” His father was a poor weaver, and most people of Columbus’s time and stature had little formal education anyway.

However, his experience at sea combined with his perseverance in self-education demonstrated his penchant for experiential learning, a characteristic that served him well throughout his pursuits. Washington and Columbus both displayed a unique motivation to learn about the world around them, as well as the willingness to work hard in order to acquire that knowledge.

Both George Washington and Christopher Columbus displayed inventiveness and creativity in their lifetimes in order to achieve their goals, whether it was sailing around the world or winning the war against the British. Columbus, determined to succeed in finding a way to get to Asia, concluded that he would be able to sail west across the Atlantic instead of taking the long, perilous route through Africa that many explorers before him had taken. Although he wasn’t successful in reaching Asia, he discovered an even more profitable land that aided Spain’s economy and finances for years to come- the New World. Similarly, George Washington decided to come up with a creative means of winning the American Revolutionary War against Great Britain. He conceived a battle strategy now known as the “Fabian Strategy”, originally used by Quintus Fabius Maximus to ensure the Roman Republic’s victory in the Second Punic War.

Washington employed this plan a year before he heard it was being used in Rome, suggesting that this idea was his own. He was successful throughout the war and ensured America’s victory from their mother country, ultimately resulting in the signing and approval of the Declaration of Independence and the Constitution. Without both Columbus and Washington’s inventive thinking and problem solving skills, the economic and military situations in both Spain and the United States of America would have been drastically different­ the two allowed their countries to flourish and grow, and provided them with military and financial support for decades to come.

The biggest legacy of George Washington was the impact he had on the succession of presidents in the United States. Throughout his terms in office, he established precedents that would hold for generations to come. For example, Washington began the tradition that presidents should only hold two terms in office. He also set the precedent that presidents could choose their own cabinets without interference from Congress. Washington coined the term executive privilege, which contributed to the idea of presidential supremacy in years to come. His hatred for political parties and belief in nonpartisanship fueled the honesty and compassion he showed in his terms of office, and he is a prime example of the way every president should behave and handle political situations. Columbus’s legacy arises more from a sense of national identity than from Columbus himself. The symbolism surrounding his accomplishments arouses a sense of patriotism in many Americans. John Noble Wilford writes in Mysterious History of Columbus, “Columbus had found the way of escape from Old World tyranny. He was the solitary individual who challenged the unknown sea, as triumphant Americans contemplated the dangers and promise of their own wilderness frontier…as a consequence of his vision and audacity, there was now a land free from kings, a vast continent for new beginnings.” He was incontrovertibly a courageous man, whose journey provided a powerful sense of identity for our fledgling nation. Columbus’s legacy speaks to the American spirit itself, one of pioneering and taking risks.

Washington and Columbus deserve the national reverence they receive for many reasons. While they both had different contributions to American advancement, their similar perseverance and spirit epitomize the qualities that have propelled our nation forth in times of turmoil. Even now, centuries later, Americans still recognize and rightly appreciate the momentous effects of these two men on history.