How Would Western Civilization Be Different If Christopher Columbus Had Not Discovered America?

The winner of the 1999 essay contest was John Victor Danford, and his participation was sponsored by the Kaneohe Valley Chapter of the NSDAR.

There are several scenarios that come to mind when one considers what would have happened had America been discovered by someone other than Christopher Columbus. Obviously, there would be no Columbus, Ohio, or Columbia, Georgia, or even a country called Colombia. But what about other changes? A country or civilization other than Spain would have profoundly influenced the way we live today. 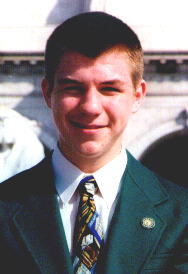 One such country is Portugal, which had already established itself as a prominent naval power. It would probably be the most likely European country to reach America, had Columbus not arrived first. The Portuguese would have been more interested in developing trade relations than in conquering new territories. Some of the changes would include using different place names (imagine living on Vasco da Gama Drive) and speaking a different language Portuguese). Our forefathers might have been forced to revolt against Portugal rather than England Most of the European countries with Mediterranean ports were content because they could already trade albeit indirectly, with the Orient. Portugal, however, wanted to find a fast, all-water route to Asia. This would have given the Portuguese an incentive to find a new course.

The Arabs were another group that could have reached America first. They enjoyed their position of middleman in the trading process between Europe and Asia. They collected. interest on the price of goods, making a considerable profit. The Arabs were dismayed to discover that their comfortable lifestyle was jeopardized by the Europeans’ desire to trade directly with Asia. Already accomplished sailors, the Arabs had invented a more maneuverable ship that later served as A basis for the construction of the caravels that Columbus used. They are also credited with the invention of the astrolabe, an instrument used to find a ship’s location by looking at the stars. They might have tried to find a shorter water route to Asia to spite the Europeans. We would probably still have had to deal with the slavery issue, since slaves were a commodity to the Arabs. Because the Arabs also sold white slaves, until slavery was abolished, anyone in America could have been a slave. Slavery would have been less a racial issue than an economic one. Our dominant religion would probably be Islam, the religion of the Arabs.

A third group that might have been capable of reaching the Americas is the Japanese. The Japanese had accumulated a huge war debt from their conflict with the Mongols. The Japanese might have used exploration as a means of solving their financial problems. If they had reached the Americas, they might have colonized what is now the west coast of the United States, placing the capital city on the Pacific side of the continent. All aspects of our lives would be under oriental influence. Buddhism would be the national religion, our buildings might resemble pagodas, we could be under the rule of an emperor, and we would speak Japanese.

These three groups may or may not have tried to reach America, but they are among the most likely prospects. Another possibility is that a Native American tribe could have crossed the Atlantic Ocean. They could have been lost, or possibly they actually could have sailed to Europe on purpose. This is, of course possible because several of the tribes on the Eastern Coast were predominantly fishermen, and several of those traveled over a hundred miles out to sea in order to make their catch. Imagine the surprise of one of the kings or queens of Europe, gazing upon a man from a land they did not even know existed. If the Native American was an Aztec or an Incan, he might have told the Europeans about the beautiful cities in his native land, where the people made offerings of gems and gold to their kings. If the Europeans had not discovered the Americas, perhaps the Americans would have “discovered” Europe.

While other Europeans would have eventually reached the Americas, it was Christopher Columbus, the consummate mariner, who bravely stood by his convictions that one could reach Asia by sailing west. Although he never reached the East Indies Columbus did, in fact, discover a whole new world.

JOHN V DANFORD, son of Mr. and Mrs. John T. Danford, was born on October 8, 1983 in St. Albans, West Virginia. He had entered several essay contests that have themes centered around American history, and won literary contests in his home state.  In 1998 he placed first in the National Society Daughters of the American Revolution American History Essay Contest on the topic of “Frontier Forts.” His essay was chosen from among 2.000 entries submitted nationwide. Mr. Danford was a member of the National Junior Honor Society as well as the school soccer team and enjoyed computer programming as a hobby.