Christopher Columbus and Amerigo Vespucci: The Men and Their Discoveries

This essay won first prize in the inaugural 1997 national essay contest featuring subjects relating to Christopher Columbus. The winner, Crissia Ahnna Reay, is from Wonder Lake, Illinois, and was studying at Hope Christian Academy in a Home Study program sanctioned under the Illinois School Code. Her essay was subrnitted through the Kishwaukee Trail Chapter, Daughters of the American Revolution.

Christopher Columbus and Amerigo Vespucci were both explorers, born in the same country in the same time frame, but there the similarities end. They were worlds apart from each other in their personal lives and significant differences were also visible in their voyages. 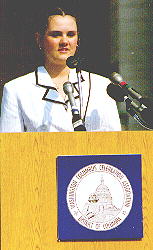 Columbus was born Cristoforo Colombo near Genoa, Italy in 1451. His father was a weaver and Columbus’s family were humble, common folk. He had very little schooling in his early life. Bordering on illiterate when he left his home in Italy, he learned to read and write in Portugal (Parry 344). Vespucci was born in Florence, Italy in 1454. However, his early life was very different from Columbus’ owing to the fact that Vespucci was born into a noble Florentine family. Vespucci was described as having a “sagacious” (scientific) mind (Pohl 55) and was educated in the areas of commercial science, cosmology, astronomy and geography. Consequently, we can understand why money and titles were so important to Columbus, while they seemed to pay a lower key role in Vespucci’s life and explorations. Having grown up with a common, almost low background, explains why Columbus felt that land, titles and wealth were symbols of success. Whereas, Vespucci’s affluent background sheds light as to why he didn’t seem driven to obtain those symbols of success and could explore for the simple quest of knowledge without stipulating what he must receive in return (as Columbus felt he must).

Columbus made four voyages to the new world, Vespucci only two that can be proven. lo his explorations Columbus visited mainly the islands of the West Indies, San Salvador, Cuba, Jamaica and what is now modern day Mexico, touching only lightly on the continent of South America. Vespucci mainly explored and charted the eastern coastline of South America (from this experience, he concluded that it extended too far and couldn’t be Asia). Columbus was interested in settling the places he found, Vespucci in mapping them.

There are other important discoveries that came from their journeys that are rarely mentioned. Columbus found the most efficient way to use the North Atlantic wind system for transatlantic sailing. He was the first of notice the equatorial current and “made the first observation of westerly compass. variation” (Parry 349). It was because of Vespucci that people found out that there were two oceans separating Europe from Asia instead of one. He created his own method of celestial navigation by which he obtained longitude and came with 50 miles of being correct in his estimation of the earth’s circumference one of the closest guesses of that time (Pohl 56).

Columbus and Vespucci were both undoubtedly great men. Their voyages, although each holding it’s own different significance, greatly complement one another. Columbus (though unable to claim title as the first European setting foot on the Americas due to previous Icelandic adventurers) was the first to make the discovery stick. In that essence Columbus discovered the new world. Columbus was the rock that started the landslide of exploration and settlement of the Americas. Vespucci, picking up where Columbus left off; was the one to conclude that it was not Asia that his predecessor had found (Columbus died thinking it was) but it was indeed a new, previously unknown land. In Vespucci’s own words, “These regions we may rightly call Mundus Novus, a New World, because our ancestors had no knowledge of them” (Lowman 16).

Vespucci actually outfitted and helped prepare far more voyages than he was part of himself. In fact, it was in that way he and Columbus first met. In collaboration with Berardi, a ship builder in Seville, Vespucci prepared a ship for Columbus’ second voyage in 1493. In 1498, he and Columbus first became personally acquainted when Vespucci made even more ships for Columbus’ third voyage (Goetz 336).

Though there was much friction between their supporters, there is nothing to suggest any personal rivalry on the parts of these two renowned explorers. In fact, towards the end of Columbus’ life when he was ailing and virtually deserted, he found in Vespucci a caring, sympathetic friend. This is apparent in the words Columbus wrote of Vespucci a year before Columbus’ death in 1506, “He has at all times shown a desire to serve me, and is an honorable man” (Pohl 56).

Whatever else is said about them, one thing remains outstanding and undeniable; they were bold and courageous explorers, who made remarkable discoveries that have permanently changed the face of the world’s geography and in a great part shaped the history of the world that followed after.