The 2001 essay contest winner was a freshman at The Portledge School in Sea Cliff, New York.  His participation was sponsored by the Mary Washington Colonial Chapter of the NSDAR.

My friends although there are many reasons why the great explorer, Christopher Columbus should be inducted into the “Explorers’ Hall of Fame,” there are three that seem to be the most important. These reasons include his courage, his impact on the world in which he lived, and his perseverance. Christopher Columbus is one of the most famous explorers in history. His fame is well deserved because of his courage, his impact and his perseverance have earned him a place in the Explorers’ Hall of Fame. 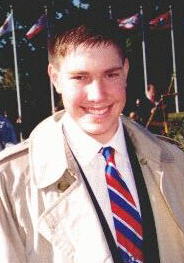 First, Christopher Columbus should be inducted in the Explorers’ Hail of Fame because of his courage. He was the first person to sail from Europe to North America. He discovered North America and opened up trade between Europe and the West. This was a dangerous voyage. In the 1400’s people did not have the equipment to make long sea voyages that is available today. Since Columbus was the first person to sail to North America from Europe, obviously he had no maps or charts to guide him. He did have a compass, but relied mostly on celestial navigation. It took courage to sail into the unknown. It took courage to go against the advice of many leaders of the time who felt that there was nothing but rocks to the west. In addition, Columbus was a foreigner to his crewman. They easily could have mutinied and killed him. However Columbus was courageous. This reason alone would he enough to induct him into the Explorers’ Hall of Fame.

The second reason that Columbus should be inducted into the Explorers’ Hall of Fame is that be had a great impact on the world in which he lived. On October 12, 1492 Columbus set foot on an Island in the Bahamas. This opened the eyes of the European world to the wonders of science. He ushered in an era of discovery that extended from exploration all the way through art and science. Artists tried new painting techniques, scientist felt free to try new experiments This led to advances in medicine. His discovery also opened the way for worldwide communication. No longer was the world divided in half. It wasn’t just the simple fact of discovering a new land. Although that was important, it was more important to discover a change in altitude. Before Columbus’ discovery the world was very reluctant to experiment and to explore. Columbus changed the attitudes of his world. For this reason he should be admitted into the Explorers’ Hall of Fame.

The third reason Columbus should he admitted into the Explorers’ Hall of Fame is because of his perseverance. Columbus’ achievement didn’t happen overnight. He worked hard to get the chance to prove his point. He first thought of his plan in 1484. It took him until August 1492 to be able to set sail for the Americas. During that time period he was turned down by King John of Portugal and repeatedly turned down by Queen Isabela of Spain. But Columbus didn’t give up. He knew what he could achieve if only he would continue. Finally, he convinced Ferdinand and Isabela of the value of his plan. This persistence is an important quality that serves as an example for us today. For this reason be should be admitted to the Explorers’ Hall of Fame.

In conclusion, Christopher Columbus should be admitted to the Explorers’ Hall of Fame for three reasons. These reasons are his courage, his impact, and his persistence. Christopher Columbus is one of the most influential explorers of modern history. He had great courage in facing physical danger. He had an enormous impact on the thinking of the people of his time. In addition, he had great personal perseverance. For these reasons and many others, Columbus should he admitted to the Explorers’ Hall of Fame.