On June 6, 1995, the Washington Metropolitan Area Transit Authority unveiled in the entrance to the Archives-Navy Memorial Metro station a large wall sculpture that among other things honors the memory and faith of Columbus. Titled “Ocean Piece,” it was donated by the Lisbon Subway system, the first permanent art donated to Metro by a foreign country. Ambassador of Portugal Fernando Andresen Guimaraes and the President of the Board of Metropolitano de Lisboa E.P., Jose Consiglieri Pedroso made the presentation. Sculptor Jorge Martins, also at the unveiling, is one of Portugal’s leading sculptors. Portuguese sculpture can also be found in subway systems in Brussels, Tokyo and Sao Paolo, and is being installed in major cities in a number of other countries as well.. 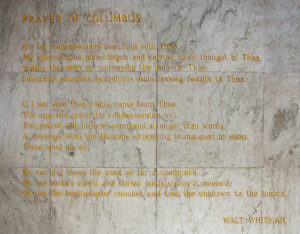 Intended to symbolize the ocean connecting Portugal and the United States, the huge wall piece is executed in gray-green Verde Viana, quarried in South Portugal, with a flowing horizontal bulge suggesting an ocean wave. The two cultures are represented by two poems: Walt Whitman’s “Prayer of Columbus” engraved and gilded on the left (west) end and “Occident” by Fernando Pessoa on the east end of the sculpture.

Since only a small portion of the Whitman poem is reproduced in the artwork, we give below the complete text, along with the poet’s own scene-setting note. The beautiful poem–indeed, prayer–is said to reflect Whitman’s own desire to communicate with God: “I shouldn’t wonder if I have unconsciously put a sort of autobiographical dash in it,” he is reported to have said. He also gave considerable thought and reflection to it, reworking it twenty times.

As for the faith and piety of Columbus which the poem celebrates, an excellent source of information will be found in the “Libro de las Profecias” (“The Book of Prophecies”), Columbus’s own notes and reflections on biblical passages supporting his understanding of his own vocation as the “Christ-bearer” (“Christopher”) chosen and fitted by God for a special mission in the expansion and renewal of Christendom. (Throughout every period of his life his writings and book notations consistently show that he saw himself as missionary and crusader.) The material for the Book of Prophecies was collected and organized and the notes dictated by Columbus over several months at a monastery near Seville, where he was awaiting an audience with the monarchs to clear himself from the charges that had brought him back in chains in November, 1500 after his third voyage. The work was intended to be the means by which he explained himself to the king and queen, and appears to have been written between September 13, 1501 and March 23, 1502. (However, notes were added later, such as relating to the lunar eclipse on February 29, 1504, while he was marooned on Jamaica, the setting for Whitman’s poem. Apparently there was also an earlier, smaller version of the work dating to 1481.)

He called it a “Notebook of authorities, statements, opinions and prophecies on the subject of the recovery of God’s holy city and mountain of Zion, and on the discovery and evangelization of the islands of the Indies and of all other peoples and nations.” It was his intention, never realized, to use this notebook to prepare an apocalyptic poem to present to their majesties. (The title, “Libro de las Profecias,” is the abbreviated name librarians and scholars have adopted. An en face edition, containing the original text–almost entirely Latin–and the first complete English translation, with an excellent introduction and commentary by the translators, Delno C. West and August Kling, was published by the University Presses of Florida as part of their Quincentennial Series in 1991.)

It was near the close of his indomitable and pious life–on his last voyage when nearly 70 years of age–that Columbus, to save his two remaining ships from foundering in the Caribbean Sea in a terrible storm, had to run them ashore on the Island of Jamaica–where, laid up for a long and miserable year–1503–he was taken very sick, had several relapses, his men revolted and death seem’d daily imminent; though he was eventually rescued, and sent home to Spain to die, unrecognized, neglected and in want……It is only ask’d, as preparation and atmosphere for the following lines, that the bare authentic facts be recall’d and realized, and nothing contributed by the fancy. See, the Antillean Island, with its florid skies and rich foliage and scenery, the waves beating the solitary sands, and the hulls of the ships in the distance. See, the figure of the great Admiral, walking the beach, as a stage, in this sublimest tragedy–for what tragedy, what poem, so piteous and majestic as the real scene?–and hear him uttering–as his mystical and religious soul surely utter’d, the ideas following–perhaps, in their equivalents, the very words.”

A batter’d, wreck’d old man,
Thrown on this savage shore, far, far from home,
Pent by the sea and dark rebellious brows, twelve dreary months,
Sore, stiff with many toils, sicken’d and nigh to death,
I take my way along the island’s edge,
Venting a heavy heart.
I am too full of woe!
Haply I may not live another day;
I cannot rest O God, I cannot eat or drink or sleep,
Till I put forth myself, my prayer, once more to Thee,
Breathe, bathe myself once more in Thee, commune with Thee,
Report myself once more to Thee.
Thou knowest my years entire, my life,
My long and crowded life of active work, not adoration merely;
Thou knowest the prayers and vigils of my youth,
Thou knowest my manhood’s solemn and visionary meditations,
Thou knowest how before I commenced I devoted all to come to Thee,
Thou knowest I have in age ratified all those vows and strictly kept them,
In shackles, prison’d, in disgrace, repining not,
Accepting all from Thee, as duly come from Thee.
All my emprises have been fill’d with Thee,

My speculations, plans, begun and carried on in thoughts of Thee,
Sailing the deep or journeying the land for Thee;
Intentions, purports, aspirations mine, leaving results to Thee.
O I am sure they really came from Thee,
The urge, the ardor, the unconquerable will,
The potent, felt, interior command, stronger than words,
A message from the Heavens whispering to me even in sleep,
These sped me on.
By me and these the work so far accomplish’d,
By me earth’s elder cloy’d and stifled lands uncloy’d, unloos’d,
By me the hemispheres rounded and tied, the unknown to the known.
The end I know not, it is all in Thee,
Or small or great I know not–haply what broad fields, what lands,
Haply the brutish measureless human undergrowth I know,
Transplanted there may rise to stature, knowledge worthy Thee,
Haply the words I know may there indeed be turn’d to reaping-tools,
Haply the lifeless cross I know, Europe’s dead cross, may bud and blossom there.
One effort more, my altar this bleak sand;
That Thou O God my life hast lighted,
With ray of light, steady, ineffable, vouchsafed of Thee,
Light rare untellable, lighting the very light,
Beyond all signs, descriptions, languages
For that O God, be it my latest word, here on my knees,
Old, poor, and paralyzed, I think Thee.
My terminus near,
The clouds already closing in upon me,
The voyage balk’d, the course disputed, lost,
I yield my ships to Thee.
My hands, my limbs grow nerveless,
My brain feels rack’d bewilder’d,
Let the old timbers part, I will not part,
I will cling fast to Thee, O God, though the waves buffet me,
Thee, Thee at least I know.
Is it the prophet’s thought I speak, or am I raving?
What do I know of life? what of myself?
I know not even my own work past or present,
Dim ever-shifting guesses of it spread before me,
Of newer better worlds, their mighty parturition,
Mocking, perplexing me.
And these things I see suddenly, what mean they?
As if some miracle, some hand divine unseal’d my eyes,
Shadowy vast shapes smile through the air and sky,
And on the distant waves and countless ships,
And anthems in new tongues I hear saluting me.”

Whitman died in 1892, the quadricentennial year of the discovery, when the nation was much caught up in giving attention to Columbus. His last complete poem, written on his deathbed and published posthumously was:

A Thought on Columbus.

The mystery of mysteries, the crude and hurried ceaseless flame, spontaneous, bearing on itself.
The bubble and the huge, round, concrete orb!
A breath of Deity, as thence the bulging universe unfolding!
The many issuing cycles from their precedent minute!
The eras of the soul incepting in an hour,
Haply the widest, farthest evolutions of the world and man.
Thousands and thousands of miles hence, and now four centuries back,
A mortal impulse thrilling its brain cell,
Reck’d or unreck’d, the birth can no longer be postpon’d:
A phantom of the moment, mystic, stalking, sudden,
Only a silent thought, yet toppling down of more than walls of Brass or stone.
(A flutter at the darkness’ edge as if old Time’s and Space’s secret near revealing.)
A thought! a definite thought works out in shape.Four hundred years roll on.
The rapid cumulus–trade, navigation, war, peace, democracy, roll on;
The restless armies and the fleets of time following their leader–the old camps of ages pitch’d in newer, larger areas,
The tangl’d, long-deferr’d eclaircissement of human life and, hopes boldly begins untying,
As here to-day up-grows the Western World.
(An added word yet to my song, far Discoverer, as ne’er before sent back to son of earth–
If still thou hearest, hear me,
Voicing as now–lands, races, arts, bravas to the,O’er the long backward path to thee–one vast consensus, north, south, east, west,
Soul plaudits! acclamation! reverent echoes!
One manifold, huge memory to thee! oceans and lands!
The modern world to thee and thought of thee.

The History of Christopher Columbus